am bitter toward the house of reps

I, like my older sister, am unable to even begin to imagine how she could turn counterclockwise.

As two people who previously may have assumed they were at least somewhat left-brained, I have decided that this is a government scheme to make us all think we're right brained.

I went back to the page and suddenly now she's spinning the other way. I watched intently for a minute, and then she started spinning clockwise again.

this article explains the illusion of it. 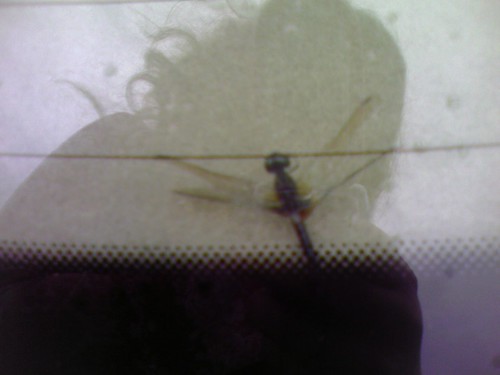 Dragonfly inside my car in the back. No idea how long it has been there or how it got in. I noticed it as i was getting gas

Answering a question posed to her at tonight's book reading at Carnegie Hall in New York, Harry Potter author JK Rowling said she "always thought Dumbledore was gay" and that he originally fell in love with the wizard Grindelwald.

Rowling also said she had read through Steve Kloves' script for the movie adaptation of Harry Potter and the Half-Blood Prince and corrected a passage in which Dumbledore was reminiscing about past loves by crossing it out and scrawling "Dumbledore is gay" over it.

Upon hearing her response, a hush fell over the audience in attendence and then applause exploded. Rowling remarked that if she had known that would be the response, she would've revealed her thoughts on Dumbledore earlier.

More on tonight's event to follow shortly, including the full question and answer segment!
Collapse