When I added the interest "non-underlined interests", it was non-underlined. Now there are seven more people who added it. Pssh.

Sam and I tried on a bridesmaids dress the exact opposite of the one I posted earlier. Silver, sequined, tight, and very hookery. There's a picture, but its the type to only to be used in the most extreme of blackmail situations. So you don't get to see it. I also have a picture of the dresses we actually picked out, but you don't get pictures of actual dresses till after the wedding.

I buried a squirrel yesterday afternoon. I found him dead in my front yard, it was quite strange. At least I know it wasn't Padfoot. We had a nice funeral. Poor squirrel, and damn all you people who told me to eat it.

Desperate Housewives was eh. Brothers and Sisters was good.

I feel like some trust was betrayed and I'm trying to let it go. I don't want things to be weird between us, but I'm hurt.

From the Governor's Square Mall, Sam and I went across the street to where David's Bridal is. And by "across the street" I mean that I had to navigate this (45°) hill... in flip flops. 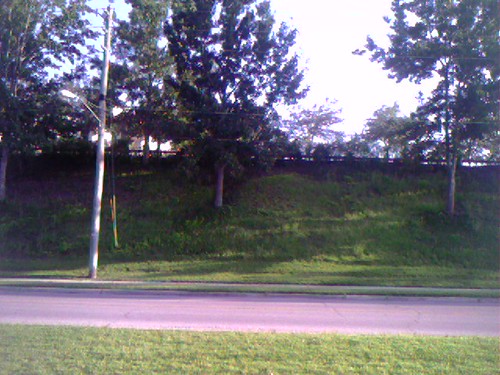 
Sam in Charlotte Russe. Those shorts were awesome. 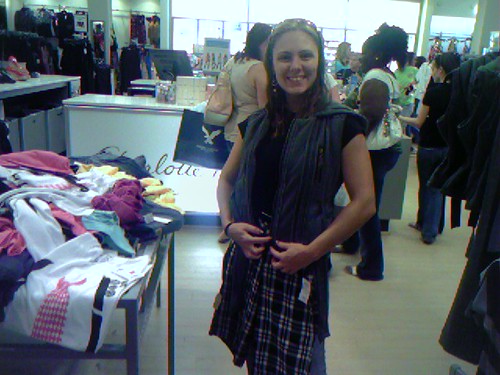 A Publix cashier gave me this five dollar bill as change. Sneaky woman hid it underneath some ones. Here it is, right before I give it to Winn-Dixie (I needed argyle socks for the bowling that we didn't do). A lighter, maybe? 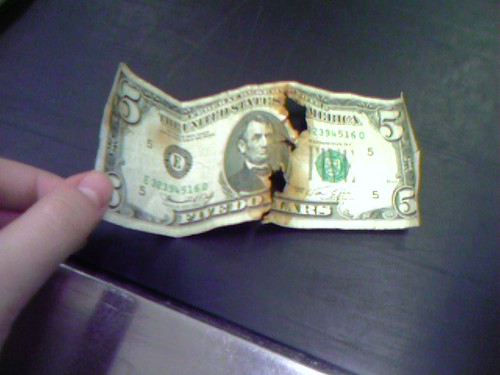 
Padfoot. What do you mean, he looks like a ball of fur? This is why I have so few "good" pictures of him :( 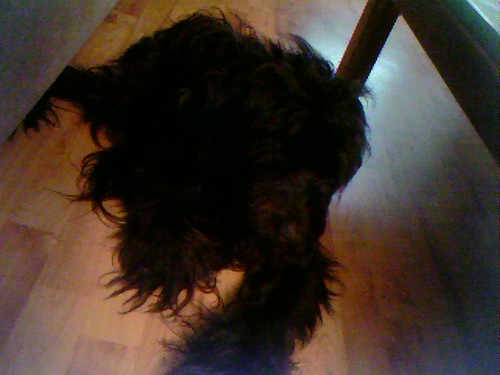 satellitewish picked six of my LJ interests for me to further comment upon. Comment and I'll do the same for you

Classical Civilizations
I got incredibly obsessed with my Latin class in high school, and continued on as a Classics major at UF. I am intruiged by specifically Greek and Roman society and culture. I coach(ed) a Certamen (trivia contest) team, organized competitions, and had a grand time learning and teaching about ancient Italy and Greece.

Eyebrows
I'm a little obsessed. I think it started when I heard a girl complaining that she was ugly, and she was. But her eyebrows just SUCKED. Big and unkempt and unibrow and ugh. She may not have been able to do anything about her weight or her unfortunate face, but her eyebrows were easily fixable (tweeze, ho), so it made me mad that she was complaining when there was something she could fix. Since then, I've always made sure my eyebrows are close to perfection. I used to have skinnier ones (though not too skinny!) and recently adopted a more natural (but still groomed and pretty) look.

Piccolo
I remember looking up "piccolo" on eBay and getting a bunch of Dragonball-Z crap. This isn't that sort of piccolo. This is the "mini-flute. I played flute in middle and high school, and in 11th and 12th grade switched to piccolo during marching season. It's a great instrument, supremely loud, and fun to play. Plus, it fits in your pocket!

Scrabble
It's an obsession, really. I got even more addicted than I had been when Facebook added a Scrabulous application. I probably play an average of one game a day, and I've gotten quite good, though now I play mostly on scrabulous.com rather than Facebook scrabulous, because I really enjoy them counting the points before I submit my word. Less work for me.

Trips to Publix
Ah, Publix. My favorite (mainstream) grocery store, and pretty much the only grocery store at which I shop (though at times other places work in a pinch). I really enjoy grocery shopping, probably because I love cooking & food so much. I also am known to sing jingles, do shopping cart racing, help little old men get things off the top shelf, and bring my own canvas bags :)

Burt's Bees Lip Balm
Long ago it was only in weird, hippie stores, though now I think several other places carry it. Imagine the best lip balm in the world, that makes your lips tingle and taste like mint. I never go anywhere without it.

I am attending a Halloween Costume Party...

But I don't know where.

Someone hold one.
Collapse