Oh what a beautiful loooong morning.

Last night I ended up leaving my parents house no earlier than 2 am, as Vivi hadn't come in till after midnight, and we stayed up and talked and hung out for awhile.

I went home, set my alarm for 7:50, knowing I had to be at my parents house by 8:45, so at that time we could leave in order to have time to get Deborah to the parade route. At least I knew that the fact that Deborah had left her clarinet mouthpiece at school wasn't going to hinder our timing, because that night she had gotten in touch with a friend, who was able to bring her an extra one.

Well, my mom called me around 8:10, my alarm not having gone off, and I rushed as fast as I could to get over there on time, making it at 8:51, and being extremely proud of myself. And then... I waited. I waited for my mom to get out of the shower. Then I waited for people to decide they wanted to bring water bottles. Then we waited for Deborah to let the dogs outside. Then we waited for Vivi to get her keys to back up her car so that we could get the van out. Then more waiting, probably for the Messiah to come or something.

We left around 9:05. Knowing that Monroe Street was blocked off from 7th avenue down, my mom decided to take some funny route down there, and we were about a block away from where Deborah needed to be. Vivi and Lola (Vivi's terrier mix) hopped out with Deborah to show her where to go, where my mom and I got close to the side of the road, were advised that "if we wanted parking near the end of the route we needed to find it soon." Vivi and Deb called back with a dilemma that Deborah's hat box was in the car. Our van that we wre driving? No, that would have been too simple. My mom's car, which at that point was not even at home, but at Champion Chevrolet, where my dad had taken it this morning to fix a blinker problem.

So we leave Deb and Vivi over there, and my mom and I detourly race over to the car dealership, where my dad is waiting for my mom's car to be ready. On the way, Vivi calls to tell us that "well, she doesn't know, but there's this girl that was supposed to come, but she isn't going to but there's an extra hat belonging to this girl Rebecca on the bus, and they don't know if we can use it, and won't know if she's coming till 10:30." Lots of help, huh. So we continue towards the dealership, and three seconds away find out that Deborah can use this chick's hat. Apparently Vivi had to call this girl's cell phone and ask if she was coming. Whew.

At that point I'm laughing out of the whole craziness of the whole situation, and we decide we may as well get Deborah's hat anyway, in case anyone else is missing their hat, they can use Rebeccas. We're no longer in a huge rush, so when we get to the dealership, my mom asks my dad if there is decaf coffee. I go to check and after passing up the donuts (woooooo go mel) I determine that there is not. So I go to tell my dad that there isn't, and Random Dude pipes in loudly something about teabags, and how he could make some tea. I'm like, "no thanks." I turn back to my dad and ask, "Dad, where did mom go" and again random dude pipes in to let me know that she went "thatta-way" down to her car. So I get to the car, lacking one hat box, and luckily it's because my mother already got it. So we drive back to the parade route, this time going a different way because the location of the band has now changed.

So I finally hop out and run a couple of blocks to bring Deb her hat ("which is good, because the other one was too big anyway") and Vivi takes a picture of me handing Deborah her hat; it's certainly been ideal.

Vivi and I go back to my mom's car where she's waiting, we miraculously find parking near the end of the parade route, and then Lola won't eat. Or poop, for that matter, but at this point I think we were solely focusing as the eating as the problem. She finally ate out of Vivi's hand. And then Vivi has to pee. There are rumors of Porta-Potties but we don't know where they are, but luckily the old capitol is both open and has a sign saying they have restrooms.

While waiting outside the capitol for Vivi to pee (and while listening to Lola whine, because she can't be away from her mommy for more than a second without freaking out hysterically and whining) we get a call from my brother.

Now, Matthew, Naomi and Kalina bought tickets several months ago for passover on cheaptickets.com. Not only were they never charged, but they found out about a week ago that these tickets didn't exist, as cheaptickets never really let Delta know about the ones Matthew bought. So in lieu of driving 16 hours, he FINALLY found more tickets, and it seemed a few days ago all was well. Until this morning, when his tickets had the wrong airline on them... or something? At any rate, instead of getting in at 4, his flight has now been changed to one that gets in at 9. Negates dinner with the family for the night, considering they're flying in to Jacksonville, and it will be midnight before they get back to Tallahassee.

We then went back, and out of starvation, bought some corn on the cob (on a stick!), which was a surprisingly good idea, and then went out to watch the parade.

It was fairly uneventful. I got lots of beads, a Geico fan, a piece of gum, fruit leather, and a cup as loot. We took some awfully embarrassing pictures of Deborah when she marched by with Lincoln band. I was duly impressed by the floats this year, and even less impressed by the Jesus squakers that walked by. I did, however, see some JCLers walking by and they got a nice shout-out. I think I also may have heckled Leon band a bit "GET a STICK drum major!!"

Deb met us shortly after the parade, we walked back to the car, and all was well. Shortly after getting home I think I fell back asleep, even after sleeping so much on Thursday night. I must really have been tired.

Me. I mean, the Geico Gecko, at the parade. 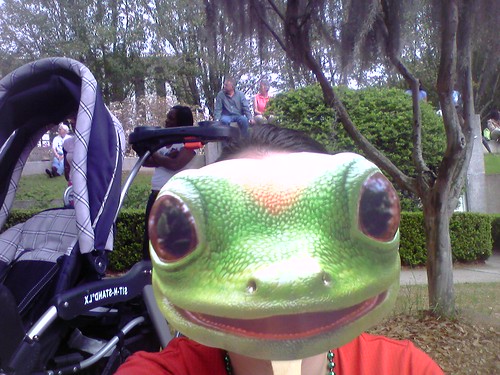